How Owning Yelp Like app Can Help You Generate Huge Revenue? 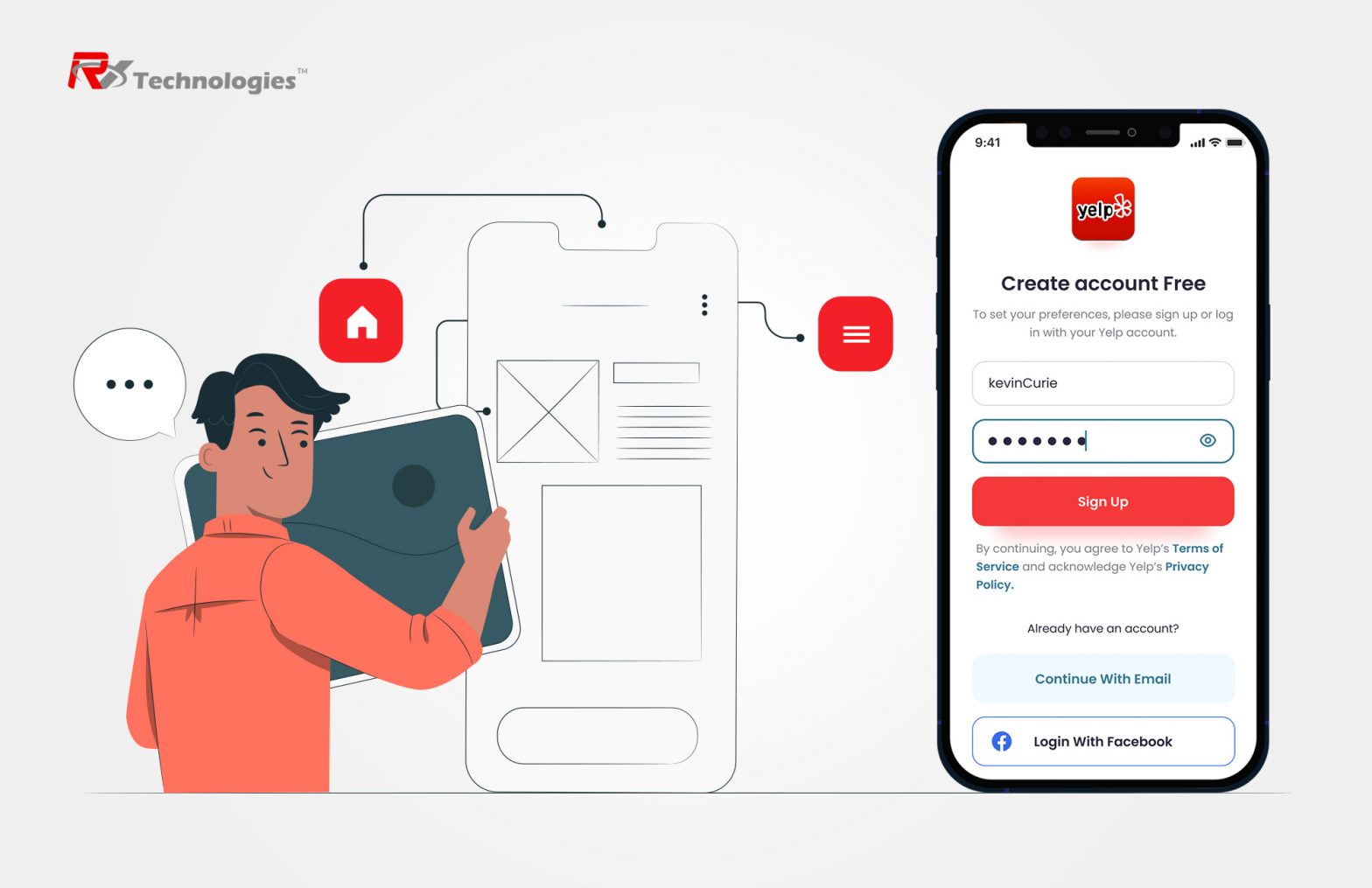 Online reviews have become the go-to weapon for customers to evaluate the credibility of a business. Studies have revealed that nearly 97% of the customers read a business review before signing up for its services. While there are different ways to find the reviews of a particular business on the Internet, the majority of customers rely on crowd-sourced review platforms such as Yelp. Yelp is an online platform where customers can find reviews about nearby businesses, share their own feedback, and even reserve tables at local restaurants. The brand started its journey in 2004 and within six years, the company had managed to earn a revenue of $30 million. As of today, Yelp is the most popular crowd-sourced review platform that attracts an average of 178 million unique visitors every month Yelp’s immense success and wide popularity are the two major reasons why many business owners and investors want to know how to build an app like Yelp. If you’re one of them, we are here to help! In today’s article, we have penned down a detailed guide on how to develop an app like Yelp.

Before diving into the guide to building a Yelp clone app, let’s first understand how Yelp works and how the company generates revenue. Yelp is basically an online marketplace that’s primarily designed to help users find local businesses such as restaurants, salons, spas, etc. Users can access Yelp via the official website, which is the 44th most visited website in the USA, or through its dedicated iOS and Android applications. In general, Yelp has three different types of target customers: All these three types of customers come together to make Yelp a functional platform. Local businesses can create dedicated business accounts and list the brands on the website. Customers, on the other hand, can find such local businesses and share their feedback to help others evaluate the credibility of the brand. Finally, content creators and reviewers can create promotional content to boost the performance of a specific business and help it gain better online exposure on the platform 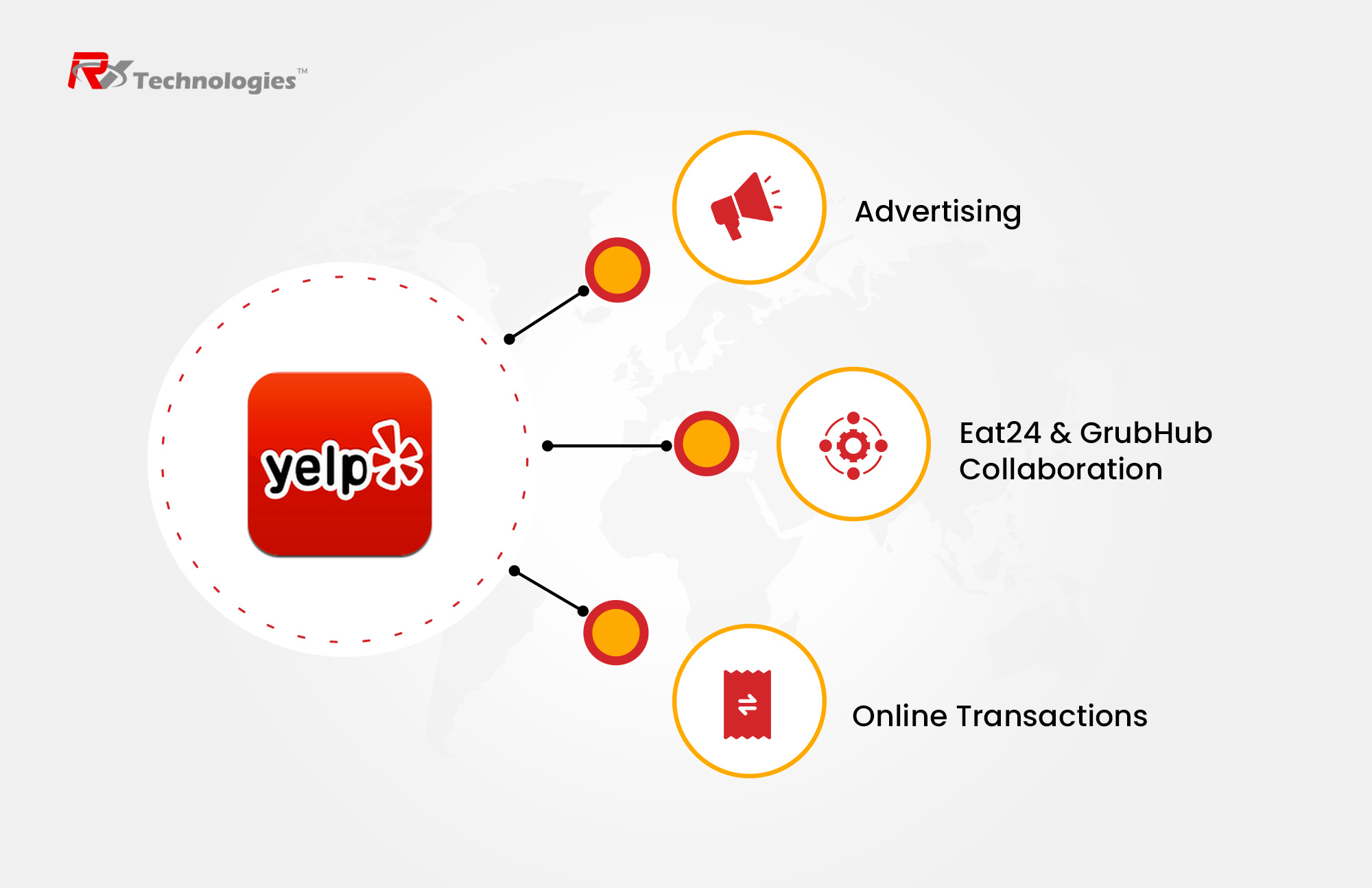 When it comes to revenue, Yelp follows multiple costing models to make money. The company follows an aggregator business model where it collects information from different businesses and presents it to the users in an easy-to-access manner. If you are planning to launch an app like Yelp as well, you’ll most likely follow the same business model to reach the target customers. However, it’s not necessary to include all Yelp’s revenue models in your website/app. Based on your specific business objectives, you can pick selective costing models and utilize them to generate revenue.

The majority of Yelp’s revenue is generated through advertisements. The company allows local businesses to list their products/services on the platform and run dedicated paid ads to acquire better exposure. Yelp follows the traditional Cost-per-Click (CPC) model to charge businesses for paid ads. It means every time a user clicks on the ad, Yelp automatically gets a dedicated amount from the decided budget by the specific business. Believe it or not, but more than 90 percent of Yelp’s revenue comes from these paid ads. Many small businesses, that want to maximize their brand visibility, run paid ads on Yelp to acquire better exposure and reach potential customers more quickly. In return, they are more than happy to share a few dollars with Yelp. Now, the advertising rates vary for each paid campaign on Yelp and depend on different types of factors such as the location, type of business, and its objectives. For instance, businesses like salons and small restaurants have to pay comparatively lower CPC rates than well-established hotels and law firms.

For anyone living in the United States, GrubHub and Eat24 are the go-to apps to satiate their hunger. These are the two most popular food delivery platforms that operate across the United States and process millions of daily orders throughout the country. However, many people may not know that both Eat24 and GrubHub are connected to Yelp. Surprising, huh? Apparently, the company bought rights to Eat24 back in 2015 and then later sold it to GrubHub. But, after this transaction, the Yelp website (& mobile apps) got introduced with a new feature where users can place orders on Eat24 and GrubHub via Yelp. No doubt, these orders are processed by the two food aggregators themselves, Yelp acts as the intermediator and generates a commission every time a user places an order through the platform. Though this doesn’t contribute a huge amount to Yelp’s revenue, considering very few people order food via Yelp, the collaboration is still one of the revenue sources for Yelp.

A Yelp-like app can also generate revenue by selling exclusive discounts, coupons, and gift cards. Even Yelp follows the same revenue model as one of their revenue streams. Yelp sells exclusive prepaid gift cards that users can purchase to grab exclusive offers on other e-commerce platforms and physical stores. In addition to this, customers can also purchase gift certificates on Yelp. These gift certificates are similar to prepaid cards but are usually bought as a gift for someone else. Like Yelp, you can also sell exclusive items on your platform and earn revenue through direct transactions.

Essential Features of a Yelp-like App

Now, to launch an app like Yelp, it would be important to integrate a few features to provide the desired functionality to the end-users. However, it’s worth noting that these aren’t the only features you can add to your Yelp-clone app. To launch a unique product, you can also come up with other features and make your review platform better than Yelp.

But, as far as the standard features of a crowd-sourced review platform are concerned, you have the following options.

This one is pretty obvious. Your Yelp-like app must allow users to share reviews and add ratings for a particular service provider. To integrate this feature, your Yelp app developers would have to set up a dedicated server that would store all the reviews/rating information shared by the customer. They can then configure an algorithm to automatically retrieve information from the server and provide users with the most useful reviews. Keep in mind that you would have to come up with a unique approach to devise the algorithm so that you can enhance the overall user experience of your Yelp-like application.

The user profile is a pretty common feature that’s a norm for almost every mobile app. With Yelp, however, you would have to create two separate environments for your target audience. The traditional user profile will allow users to set up their profiles that they could use to rate local businesses, write reviews, and make reservations. The Business Profile, on the other hand, would only be available for the business owners. They could create separate business profiles for their brands and optimize them to increase the overall customer acquisition rate. Through a business profile, the user would also be able to run paid ads for their listing and gain better exposure. Based on the profile that a user has chosen, your Yelp-clone app must automatically adjust the feature list and the layout to deliver an optimal customer experience.

Push Notifications are another common feature that’s present in the majority of mobile apps. Even Yelp sends regular push notifications to the users. However, as of now, Yelp only uses Push Notifications to notify users about the reviews and ratings of nearby places. This is an opportunity for any Yelp-clone app to leave the review-giant behind. In addition to normal reviews and ratings, you can also utilize push notifications to remind users about their reservations. You can also send notifications regarding new businesses in the locality, paid campaign performance, and regular daily reminders. This will allow you to deliver a personalized user experience and turn normal users into long-term valuable customers.

Geolocation is also one of the integral features of an app like Yelp. Why? Because you would not want the users to pinpoint their locations on the map (something that’s extremely boring and time-consuming). With geolocation integration, your Yelp app developers will be able to configure the app to automatically detect the user’s current location and customize the business suggestions accordingly. So, let’s say if a user has just landed in California and wants to find a decent place to eat Sushi. Instead of having him change his location in the app manually, it would automatically get updated and he’ll be able to see all the Sushi places in California along with their reviews. This minor feature would go a long way in keeping the user experience intact and help you retain one-time visitors more effectively.

If you want to sell exclusive gift cards on your Yelp-like app, you would want to integrate a payment gateway to offer a secure transactional experience to the customers. One of the easiest ways to do this is to integrate a third-party payment gateway. There are many service providers such as PayPal that provide their APIs at a reasonable monthly price. You can sign up on any of these platforms and ask the Yelp app development company to integrate its API into your mobile app.

Now, Augmented Reality (AR) is not one of the necessary features for a crowd-sourced review platform, but it can easily enhance the overall usability of the app. If you don’t know already, Google introduced the AR technology to its official translator during the 2019 I/O keynote. With this AR integration, the Google translator was now able to detect languages simply through the phone’s camera. In simple words, the user could open the Translator app, start its AR feature, point the camera to a signboard (whose language he wants to detect), and the app would automatically translate it to the selected native language. Like the Google translator, you can also use AR Integration to make your app more functional. However, instead of translating a signboard, your Yelp-like app would show the ratings of a particular local business as soon as the users point their camera towards it.

How Much Would It Cost to Develop an App Like Yelp?

The scope for a crowd-sourced review app like Yelp is unparalleled. By integrating unique features, you can make your Yelp-like app distinctive and directly compete with an industry leader to establish an effective brand presence. Of course, if you want to achieve this goal, it would be important to hire a dedicated team of Yelp app developers who have experience in utilizing modern-day technologies to build a user-centric review platform. Having worked on similar projects in the past, we can assist you with a Yelp-like app easily. Grigora Food App is one of the cross-platform solutions that follow the same aggregator business model as Yelp. Our development team built this user-friendly platform to help users find nearby restaurants, place orders, and share their feedback at the end. So, share your vision for the Yelp clone app and we’ll devise a custom roadmap to turn your idea into a working mobile solution.