How Does a Mobile App Generate Revenue for Your Business? 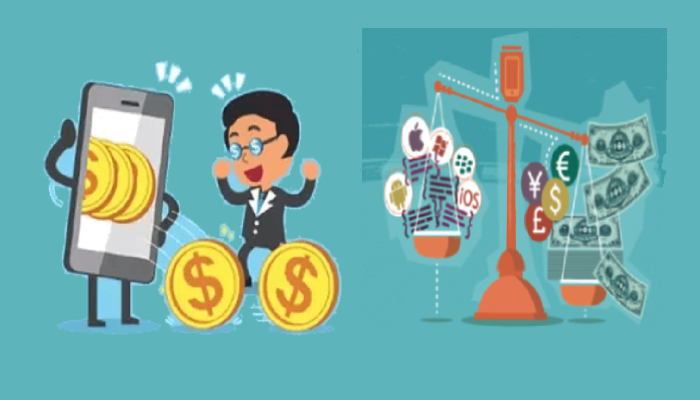 Mobile has become the biggest platform for every business owner to reach its target audience. A person on an average spends more than 4 hours on his/her mobile navigating through different apps.

With mobile app development gaining popularity among business owners, the yearly revenues of the mobile app industry is growing exponentially. The worldwide mobile app revenue, according to Statista, was 69.7 million dollars in 2015 which is expected to surpass the hundred billion benchmark by 2020. Business owners can grab this opportunity to boost up their business revenues simply by providing their users with feature-rich mobile applications.

However, how do these apps actually generate revenue? For every mobile app publisher, it crucial to inherit some sort of revenue model into his app to recover the overall development cost and generate revenue in the future as well.

An app publisher spends thousands of dollars before publishing the app, be it for patent or other development factors.

Haven’t patented your app yet? Read, how to patent a mobile application and patent your app to acquire its intellectual property rights.

When it comes to making money using a mobile application, the most obvious way is to put a price tag on it. Every time a user downloads the app, he pays a certain amount of money.

However, the odds for a person to pay for your app are extremely low? While as surprising as it may sound, the yearly revenue of free apps in the app market is relatively higher than paid apps. On any given day, a user would prefer downloading a free app rather than a paid one.

So, in today’s blog post, we have decided to scribble down a list of monetization strategies via which you can make money from your free mobile application. If you have been brain-storming around the thought on how to create an app and make money continue reading.

For more than a decade, mobile advertising has been the highly-profitable monetization model for free apps. Over 32.5% of free app providers solely rely on advertising to generate revenue, and surprisingly they make quite a fortune from their apps.

Tapjoy and AdMob. As soon as you sign up on an ad platform, your app starts to display ads in various formats. You get paid for every impression, every click, and every download (if the ad directs the user to another app).

Here are some of the most common ad formats in which ads are displayed on a phone’s screen.

Banner ads appear either at the top or bottom of the app without affecting user’s interaction at all. They are smaller in size, and therefore are hard to notice. Among all the other ad formats, Banner ads have relatively low engagement rate, i.e., 0.1% CTR.

Interstitial ads are the full-screen pop-ups that appear after particular time frames. These ads are stretch across the phone’s screen and completely hide the app’s content. However, the user can close the pop up simply by clicking on the close button at the top right corner.

Having a relatively bigger size, these ads have higher chances to engage a user. The lucrative 10% engagement rate makes interstitial ads the preferred choice of an owner. However, the overuse of interstitial ads can also vandalize your revenues completely. So, set the transition point cautiously so that the ads don’t seem like a restriction to the users.

In-app video ads usually provide rewards to the end-users as well. These ads are commonly used in mobile games where the user has to watch a video in exchange of which he receives rewards such as in-game currency or an extra life (in a game).

In-app video ads are a win-win situation for both the publisher as well as the customer, as both get rewarded at the end. Furthermore, since you are baiting the user, the engagement rate is comparatively higher.

These ads are typically used in the content-based applications. The design and appearance of native ads depend on the design of the app itself. These ads don’t interrupt user interaction as they appear in between the content itself.

In most of the cases, the ad’s subject is similar to that of the app’s content, which increases the probability, for a user to click on the ad.

In-app purchases are not meant for every application as to use this revenue model, your app should have engaging content that hooks the user 24/7. Mainly leading mobile games utilize this model by selling virtual currency or other in-game objects to the users.

In-app purchase is a highly profitable revenue model as gaming enthusiasts always want to level-up in the game, and to do so they need certain items. A user’s addiction to a game is what leads the app publishers to boost up their revenue.

Every leading game in the app store utilizes in-app purchases as their revenue model to generate revenues. Pokemon Go, for instance, ended up making over $1.5 million a day through in-app purchases only. Clash of Clans and Candy Crush have also surpassed the $1 million/day benchmark by selling in-game items to the users.

However, implementing this revenue model into your game requires technical expertise. As soon as you start selling items within the app, you need a secure payment gateway to ensure users that their payment details are completely safe.

Despite being a profitable monetization model, in-app purchases have limitations, which restricts an app publisher from implementing it in his/her app. For instance, your gaming app should be popular among the users, and moreover, a user must be willing to pay for an item. So, before inheriting this model as a part of your revenue strategy, focus on boosting up your customer base.

The freemium model is quite similar to in-app purchases. It follows the same strategy, i.e., entice users with engaging content so that they are willing to pay for additional features.

However, apart from providing them with in-game items, you provide a couple of advanced features. This module is capable of serving a wide range of mobile apps, from music players to fitness apps.

The regular version of the app, with some additional features, is always free to the user and he can access it without paying a single penny. However, to gain access to locked features, with advanced functionality, the user has to pay a certain amount of money to the app publishers.

Like the in-app purchase, the freemium model also requires your app to have a large audience. Statistics suggest that at most 2% of app users pay for the premium features, and therefore it is crucial to have a huge customer base so that those two percent users can hike up your revenue easily.

Since the proportion of users, who are more likely to pay for the additional features, is relatively low, you can also integrate other revenue models in your app. For instance, many app publishers utilize advertisement as their revenue model in the free version of the app and rely on the freemium model once a user pays the money.

The subscription model is commonly used by content providers, who offer limited content for free and then charge a subscription fee for the rest of the content. Streaming apps like Netflix, Spotify, and Amazon Prime mainly use this model to earn money.

At first, these apps provide the user with free content for a certain period of time like a month or a week. As soon as the month ends, the user loses access to the content and can only regain it after paying the subscription charges.  Again, the strategy behind this revenue model has a few similarities to in-app purchases and the freemium model.

Which Revenue Model Suits Your App the Best?

In such a scenario, utilizing an advertisement model can generate huge revenues for your business. However, relying on a single revenue-model is never a good practice. Since your app has a wide range of audience, belonging in different categories, it is better to amalgamate 2-3 above-mentioned models in your app.